A Radical Practice in Liverpool: the rise, fall and rise of Princes Park Health Centre 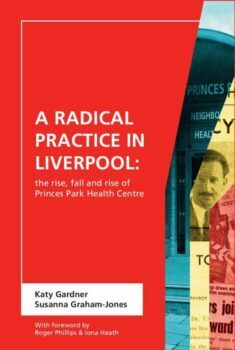 A radical practice in Liverpool: the rise, fall and rise of Princes Park Health Centre, by Katy Gardner and Susanna Graham-Jones.

‘At its best Princes Park Health Centre was Nye Bevan’s dream fulfilled: health care, free for all at their point of need, from the cradle to the grave.’   – Chas Clegg, district nurse

A radical practice in Liverpool: the rise, fall and rise of Princes Park Health Centre, written by Katy Gardner and Susanna Graham-Jones, both GPs who worked at the practice, where a dedicated multidisciplinary primary health care team provided exceptional care to patients.

The team worked with local organisations more broadly to make Liverpool 8 a healthier place and to tackle poverty and racism. ‘Health Through Arts’ events involved patients and local artists; research projects on homelessness, ethnicity and health, and heart disease started here, in the inner city. The practice struggled bravely against Thatcherism, maintaining its focus on social justice throughout the 1980s and 1990s despite the chronic lack of funding for the NHS. However, the heavy workload took its toll on those who worked there. The principled decision by the GPs to become a salaried practice in 1998 was followed by gruelling times, with loss of autonomy and chaotic NHS fragmentation as privatisation encroached. The later sections of the book chart the struggle and rebirth of Princes Park Health Centre, acknowledging the vital role played by patients and the local community.

A RADICAL PRACTICE draws on the vivid memories of patients and community activists as well as health workers. It is set in the political context of the time and reflects the turbulent history of the National Health Service over the last 40 years.

The book is also available at News from Nowhere, Liverpool.

Buy Now
By clicking “Accept All”, you agree to the storing of cookies on your device to give you the most relevant experience by remembering your preferences and repeat visits. You can also visit "Cookie Settings" to provide a controlled consent.